And the Franchise of the Year Is... Team Wall! 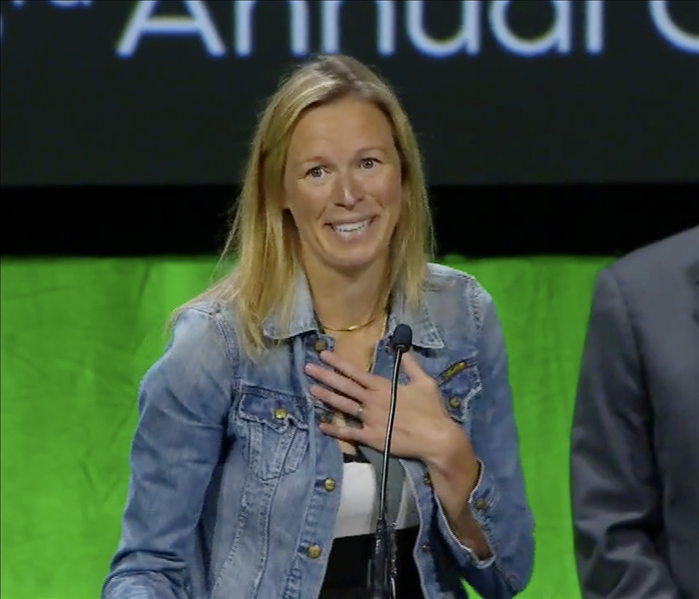 “And our new Franchise of the Year is…Team Wall.” It really is just the beginning!

We did not have family in the area to help with childcare. Our earnings reinvested back in the business, I decided to stay home with our young kids to offset costs. Meanwhile, Jim was working full-time as an entrepreneur (to the third degree). To say that he worked 18-hour days, on a daily basis is no exaggeration- sometimes he would go up to 2 weeks without seeing our boys. Before daybreak, he was out the door, and he didn’t get home until after bedtime. Weekends were non-existent and vacations were impossible. If we went to an event, we always had a contingency plan… just in case that phone would ring. This was our way of life.

In that time, we learned about the dichotomy of ‘teamwork’. Success in family and business was our common goal, but in order to make it happen, we had to be incredibly independent. The whole experience was a crash course in faith, self-reliance, grit, and innovation. Man, could it be lonely sometimes.

Often, I wondered,  “is it all worth it?” On those days, the weather would break and the phones would start ringing. It is difficult to capture in words the joy that radiated from Jim’s every step and exuberance in each word he spoke. In those moments, he thrived. Backed by his team of 15, Jim loved taking on the challenge of a mounting workload. Saying “yes” was his mantra and “figuring it out” was like fire in his veins. This was his passion and I did all I could to support him.

We thought for two years that we were the only people that lived and experienced our crazy way of life until I flew to St. Louis, MO for my first SERVPRO convention. Upon arrival, I looked around and immediately realized I was completely wrong. Thousands of people just like us were gathered to network and learn from each other. The experience was an unforgettable week of soaking in all things SERVPRO. I was starting to get to the core of what Jim found so exhilarating about this business. However, I remember thinking, “If I have to listen to one more conversation about dehumidifiers…!” ??

At convention, the top 100 franchises in the entire SERVPRO system are highlighted and celebrated at every awards banquet. The top 3 are even treated with a special video. Watching on the 100-foot screen in front of me, I witnessed with pure awe as those stellar teams were highlighted. I made note of the advice they gave, mentally logged their massive revenue volume (#1 was at $12M), and secretly wondered deep down, “Could it ever be us?”

“Us.” That was the very first time I thought of it as something other than just ‘Jim’s Business.’ For the first time, it was ours. I was no longer merely supporting his dream. Instead, we were tackling a vision together. From the beginning, it was “us,” regardless of the time I spent as a stay-at-home mom or wasn’t involved in day-to-day operations. Building a team, we redefined our last name to mean something that meant more than ‘just the two of us.’ We became a very cozy “just the 150 of us”…Team Wall.

Fast forward to June 2022. Eleven years later, after massive growth and life events, I found myself sitting in a room of a thousand of my SERVPRO peers at the end of the 2022 convention. Eight of our amazing team members sat by my side. Jim, however, was sitting on the tarmac of Dallas Love Field, about to head home early.

Suddenly, they were announcing an award that we always quietly wondered might include our name one day, although we always felt a sense of improbability. We roll with a sea of titans at SERVPRO, anyway. Among them, who were we?

“And our new Franchise of the Year is…Team Wall.”

What was the first thing that went through my mind? Elation…intricately weaved with devastation because Jim wasn’t there. It was his dream to begin with and he wasn’t there to witness an incredible moment. This had my heart breaking and tears welling up in my eyes for hours. Days? Maybe more. Even while writing this, I’m still emotional. ??

After hugging every one of our Team Wall members tight, together we walked up to accept the incredible recognition. Next, I did what anyone else would do: I told all of the one thousand people in the room to text Jim and tell him that we are FRANCHISE OF THE YEAR baby!!!

His phone was blowing up. For each and every member of Team Wall, Jim was crying tears of joy and pride for their achievements. What began as a dream for one became much more than we could have ever imagined.

Congratulations to every member of our team for this incredible accomplishment. You should be so proud of yourselves!